There has been a lot of buzz surrounding 3D Robotics Solo – the world’s first “smart drone” since its release in July, 2015. In this 3D Robotics Solo Review, we tell you if the hype is truly justified.

3D Robotics is well known as one of the most innovative makers of consumer drones. 3D Robotics drones such as the Iris+ have made their mark in the industry because of their sophisticated design and advanced technology. And with the new 3D Robotics Solo, the company has outdone itself and come up with the first “smart drone” in the world.  Let’s find out more about this amazing new quadcopter. 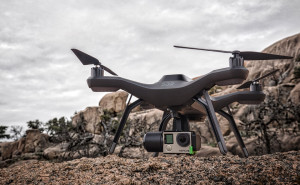 The Smart Shots feature is easily the most impressive aspect of 3D Robotics Solo. Smart Shots is what makes Solo “smart” – helps with the setting up of cameras and controls the shooting. With Smart Shots, you only need to make a few settings at the start, and thereafter, the drone starts shooting on its own.

There are four shooting modes that you can set up with Smart Shots. The first is one that creates an imaginary cable which follows the drone wherever it goes. So, the drone remembers this route and flies back using the same route created by the imaginary cable.

In the second mode, Solo takes wraparound shots by focusing on a specific object and revolves around it, forming perfect circles. Then there is the selfie mode where Solo focuses on you as you operate it from a short distance and takes your selfies. The last mode is a Follow Me mode, where Solo follows you wherever you go without you having to do anything to control it.

It is unheard of for consumer drones to have the sort of processing power as possessed by 3D Robotics Solo. The quadcopter has two dual computers built in, each with a processing power of an amazing 1 GHz. The machine is easy to control and can be operated using iPhone, iPad or an Android device through an app.  The controller has just two buttons, which are enough to operate the drone. 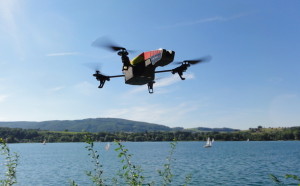 One of the most important things you would expect from a quadcopter is its compatibility with GoPro cameras – which capture HD quality videos and are the best cameras you can have on any drone. Solo comes with a 3-Axist gimbal that is flexible and yet stable, and works well with the controller. The gimbal is smart in its own right and shoots videos and takes shots automatically.

The 3D Robotics Solo app is available for both iOS and Android, and it is by far the best app for drones we have seen so far. It offers an excellent functionality and control over the drone, allows you to adjust the speed of the drone when in flight, manipulate the camera, and manage the takeoff and landing, as effortlessly as possible. The Solo app receives all automatic software updates and transfers them to the drone without using USB cables. It records all videos from the drone cameras so that you can view them on your smartphone.

One of the things we liked most about 3D Robotics Solo is its modular design – which means you can add new functionalities and features to it as and when they are developed. Solo has been designed in such a way that it evolves with every change in consumer drone technology, so it will never go out of fashion.

Paradigm Shift: How Robots Are Finding Their Way Into Pharmacies