When a vacuum-powered beanbag works better then what is the need to bother with expensive artificial fingers? Robots are great at manipulating objects like automobile parts. But what about a glass of water, a ball bearing, a coin or a raw egg? Terminator-style artificial hands are expensive and awful at picking up everyday objects. But the human hand is an incredibly delicate instrument whic is capable of firmly gripping objects and until we decide we’re good and ready, it will not let it go . Robot hands tend to be both clunky and metallic, and often result in dropped items. But no longer. 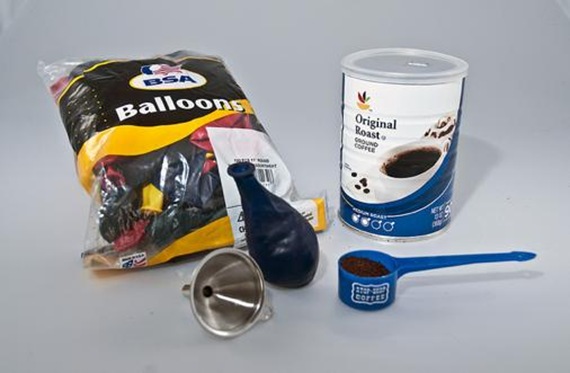 The secret lies in the coffee and in balloon. You’d think that was a typo and not real, but not so much.  Scientists from Cornell, the University of Chicago and iRobot have created human-analogue hands using nothing but coffee grounds, party balloons and a vacuum pump. Amazing! Right? It is inspired by Cornell’s new innovative robotic gripper (a sort of shape-shifting balloon hand), Steve Norris of Norris Labs decided to go DIY and make his own home-brewed replica at a lower cost. Heinrich Jaeger has built a hand that can pick up almost anything out of a balloon, coffee grounds and a vacuum pump Jaeger writes – Most current designs are based on the multi-fingered hand, but this approach introduces hardware and software complexities.

These include large numbers of controllable joints, the need for force sensing if objects are to be handled securely without crushing them, and the computational overhead to decide how much stress each finger should apply and where. Coffee grounds a “particulate material”, which contains individually solid particles that are present in large aggregate clumps. Particulate materials have what is known as a “jamming transition” that occurs when they are compressed and the particles go from being able to slide past each other (like a liquid) to jammed together (like a solid). “It basically works on the same mechanics as when coffee shops vacuum-seal packs of ground espresso,” Heinrich Jaeger, a lead researcher on the project, tells Co.Design.  He also said -“It needs no special sensors to compute how much pressure to apply–the materials of the gripper just do it automatically.” Our robot’s hand starts with an ordinary party balloon filled with coffee grounds, but not with air. When an object needs to be gripped, the balloon-ended arm reaches out and contacts it, and the coffee grounds easily deform around it. A vacuum is used to pull all of the air out of the balloon, slamming the coffee grounds together and making them one solid, tightly-gripping mass, in order to firm the grip. When the time comes to let the object go, the vacuum is released, and the coffee grounds un-jam themselves and start sliding around again. The “hand” is nothing more than a stretchable bag filled with lightweight “granular materials” (such as coffee grounds in the demo video, although salt, sugar, or glass beads also work) attached to a vaccum pump.

According to the minds behind the project, this is the closest to “real-world” application that the robotic gripping field has ever been, and it has even been able to grip commonly “un-grippable” items for robots, including raw eggs and coins.

Other materials were tried, such as sand and rice, but coffee provided the best blend of minimal weight and a high jamming ability. The beanbag grains go through what’s called a “jamming transition,” in which physical pressure makes the tiny particles lock together and unlock again on demand. (That’s why the robot can also put the raw egg back down after picking it up.) The jamming transition doesn’t require special materials–“even M&Ms could work,” says Jaeger–and the passive grip can be strong enough to lift a shotput or gentle enough to cradle a light bulb. Their prototype “hand” is only 10 centimeters in diameter, but Jaeger speculates that a 1-meter-wide model “could lift pretty much anything that wasn’t made of lead”–like, say, collapsed beams after an earthquake. Take that, Terminator. 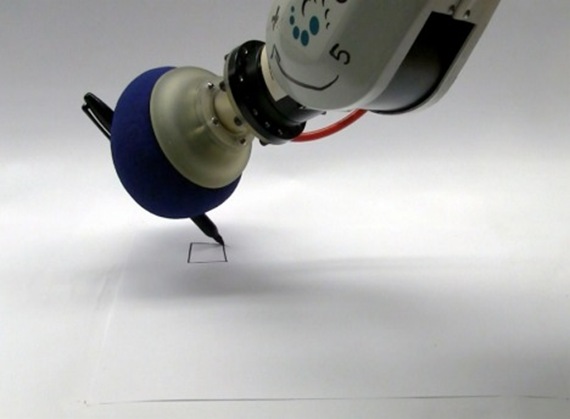 Its the simplicity that kills. The hand does exactly what a hand is supposed to do- pick things up without breaking them. It does away with all the complexity that comes from trying to mimic in metal what took millions of years to evolve. This is brilliant design. Sure, we probably would have some concerns about the longevity of a hand made of rubber and old coffee grounds, but there’s an ecological flair here, combined with a sense of true invention! 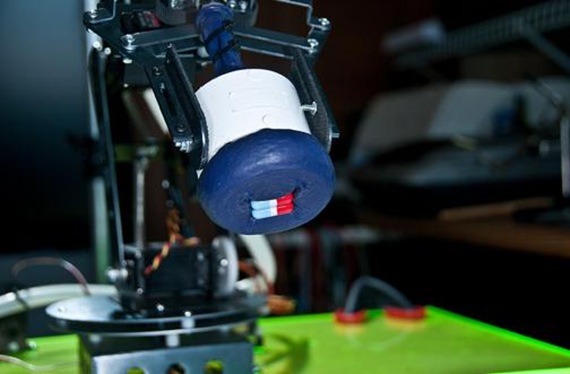 Paradigm Shift: How Robots Are Finding Their Way Into Pharmacies